Specifications
No items in cart

What are they and how do they work?

If you live in the country or a small community, or if you have a cottage or recreational property, you probably have an on-site sewage disposal system, sometimes called a septic system, and a water system from a well. These systems serve properties that are not directly connected to municipal sewer or water systems. An on-site system is basically a recycling system that uses natural processes to treat and dispose of the "sewage" or wastewater from normal activities in your home. A typical on-site system includes a septic tank and a disposal field (sometimes called a soil absorption area or leach field) that work together to treat the wastewater. Figure 1 shows an example of a modern system. 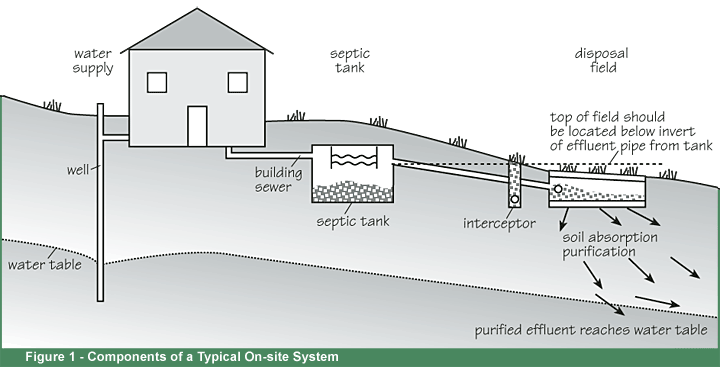 The on-site system is built to handle certain types and amounts of wastewater. It treats both " black water " (toilet waste) and " gray water" (wastes from the kitchen sink, bath and showers, laundry, etc.) Extra "clean" water from sources such as roof drains, footing and foundation drains, basement sumps and water treatment units should not be discharged to the on-site system as this extra water does not need treatment and may overload your system.

How does a septic tank work?

Wastewater from the house usually flows by gravity through a building sewer pipe into the septic tank as shown in Figure 1. In some types of systems wastewater is pumped from the house to the tank. The tank is designed to store the wastewater for a day or more before discharging it to the disposal field or to further treatment. During this time, the heavier sewage solids settle to the bottom to form a sludge layer. Lighter solids, fats, greases, and oils float to the top to form a scum layer on top of the water. This leaves a middle layer of partially clarified liquid wastewater as shown in Figure 2. 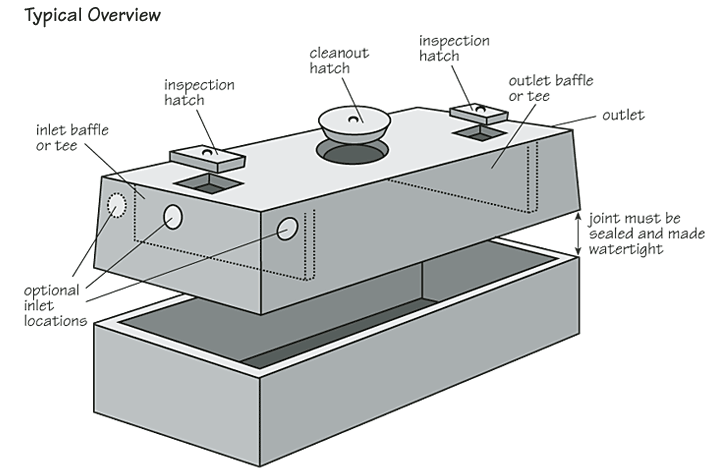 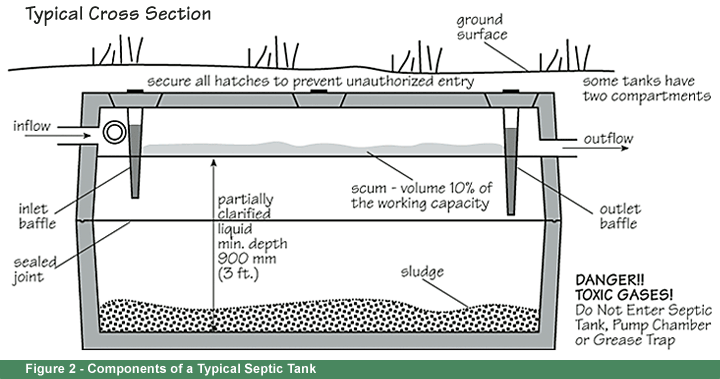 It allows the solids and liquids to separate, which prevents the solids from being carried into the disposal field and clogging the field and surrounding soil.

It allows time for bacteria naturally found in the wastewater to break down or digest the solids. This process takes place without the presence of oxygen and produces gases that must be vented from the tank. Since bacteria reduce the amount of sludge and scum by less than half (approximately 40%), the tank must be pumped regularly to remove the rest of the solids. An outlet baffle in the septic tank allows only the partially clarified liquid in the middle layer to leave the tank. This liquid is called effluent. It still contains bacteria, suspended and dissolved organic solids and other materials that can be dangerous to health and to the environment. The effluent is discharged to the disposal field, which distributes it into the soil for further treatment and disposal.

How does a disposal field work?

Effluent normally flows from the septic tank to the disposal field by gravity because the water level in the tank is higher than the level in the field. Distribution pipes to the field are made of perforated PVC or ABS plastic pipe. Longer systems or systems that cannot be gravity – fed need siphons or pumps and pressure distribution piping to distribute effluent evenly into all parts of the disposal system. 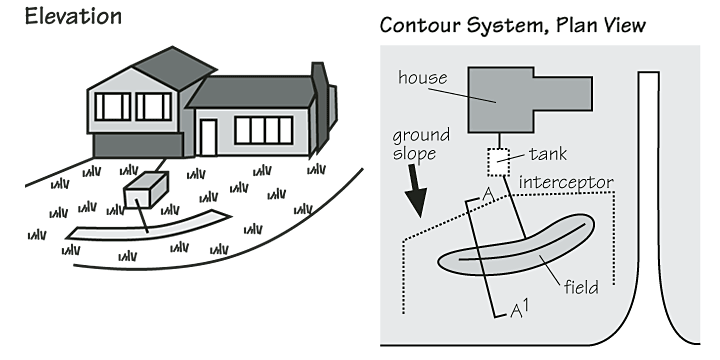 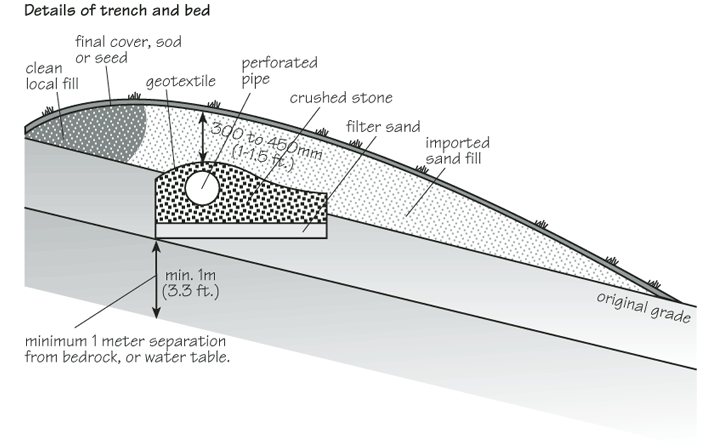 Disposal fields consist of several components each with a different job. Sod: protects against frost and erosion, sheds surface water and stores surface water that soaks in until it evaporates or is used by plants.Clean Local Fill or Imported Sand Fill: supports the sod and helps it work, and allows oxygen and other gases to pass into and out of the disposal field.Geotextile (synthetic barrier material): prevents the backfill material from moving down into the crushed rock and clogging the openings between the rock particles.Perforated Distribution Pipe: distributes the effluent evenly to all parts of the field through regularly spaced holes. Crushed Rock: surrounds and protects the pipe and stores and distributes the effluent over the disposal area.Filter Sand: provides a place at the boundary between the sand and crushed rock for a biological clogging mat, which will form after a number of months of operation. This sand must meet specific permeability and size requirement.Natural Soil: acts as the final filter to remove harmful organisms before the effluent reaches groundwater, which may supply a well or discharge into a lake or stream.

As the effluent trickles slowly from the pipes into the field and eventually into the natural soil, the components of the field and the associated soil microorganisms work together to treat the wastewater. Harmful bacteria are physically filtered out and also destroyed by soil microorganisms. Some dissolved components in the effluent are taken up by plants, absorb (stick) to soil particles, or are broken down by soil bacteria. When the effluent finally leaves the system, it should not harm public heath or the environment.

To learn more about septic care visit: ”Before You Construct an On-site Sewage System: Facts a Homeowner Should Know” (1 MB) & ”Homeowners Guide to Septic Systems: Your Septic System Is Your Responsibility” (19MB)